Anyways, Reaction (or emotional feelings) to that depends entirely upon one factor and that is in which category one falls in, for example,

Suppose, you were NET Short Seller during this then – WOW, AWESOME, UNBELIEVABLE

But, IF you were NET Long during this fall then your emotions will be – Anger, quitting (giving up), loss of self-esteem and self-confidence, stress and depression.

DEPRESSION: because Markets are Speculative, manipulative and Retail Traders like you don’t stand a chance; this feeling comes immediately after losses.

Same is valid if you have not traded anything during the period.

Rocket Trades was in between ie (long and short), had INFY Short Sell but long in HDFCBANK. 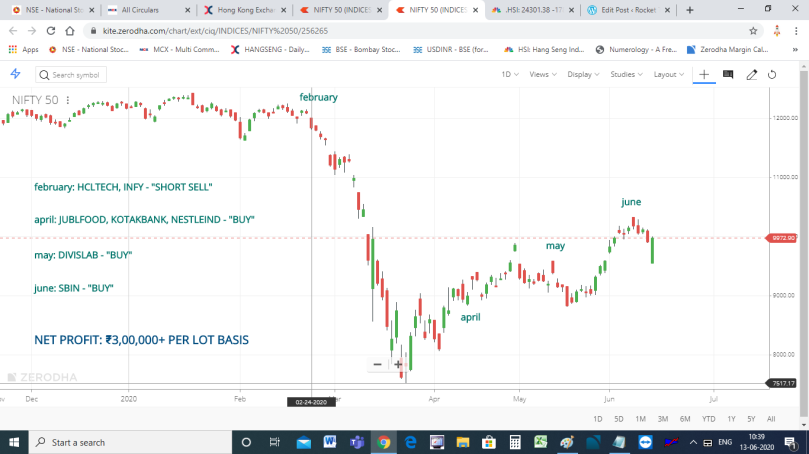 In between, BHARTIARTL BUY achieved 600+ Target is less 5 working days, but missed.

Summary of 10 Stock Futures’ Calls are mentioned below: February – till date

Eighth, Ninth – both were Profitable and generated ₹70,000/- Profit per lot

Human error played it’s part otherwise we could have ended with 6,00,000/- plus profit in Five months on 5lac Capital, if above list is any indication.

Anyways, we will try to do our best in upcoming months.

During the Period we did not get any Trade Entry.

Though mentioned each of NIFTY50’s major turning points but couldn’t advise any trade simply because Market did not spend enough time at Pillars’ Strategy Entry levels.

“Brave New World” and “Be Careful of Herd Mentality”:

Likewise, Nil advise for Gold, Silver, Crude either in BUY or Short Selling. And as you aware that long back we stopped tracking Copper, Zinc, Lead, Natural Gas, etc.

We advise on the basis of “One Script One Lot” and suggest 3 to 5 Individual Script’s Futures at a time.