Now, it is time to understand the following Images,

On 31st OCTOBER 2017 (after market hours), ROCKET paid clients were informed that Nifty has 10500 level as Strong Resistance.

Though it was not 100% sure shot but well calculated at that point in time. And secondly, we believed that it is much better knowing the upper limits in advance then nothing. 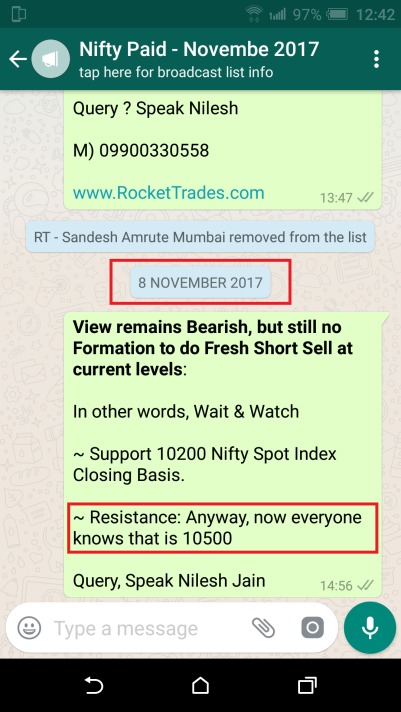 Likewise, another message was sent to paid clients on 8th November 2017 (just before closing) that Nifty remains bearish only but no fresh trading is to be done at current levels. And now it perfectly turn out to be an accurate view, too, because market has had done nothing thereafter, except few stocks flying or falling all of sudden.

Expectation for Next Week & thereafter:

We are keeping our eyes wide open for Fresh Formation in anyone or all to confirm Nifty’s next possible up or down trend confirmation.

No doubts that Nifty bulls are safe as long as,

~ USDINR: is coming in Buying mode, which means Indian Macros are threaten again

Therefore, we are quite open to idea of giving Buy in NIFTY but only below 10200 because there are chances that 10200 could be new “9700 styled strong Support” as we saw during August & September 2017 expiry, which can provide market triggers to hit Fresh target on Nifty in range of 10700 to 10900.

But again, need confirmation of Bullish Set-Up and ideal conditions for that BUY entry.

In short, we are open for both side Trades, provided market gives confirmation.

In other words, we are waiting Market to either give closing below 10200 or above 10500 to initiate directional trade. In all cases, final confirmation is must from ROCKET.

Until then expect Market to trade with choppiness and in volatile fashion.

3 Individual Script’s Stock Futures, on the basis of One Script One Lot, will be open at a time simultaneously.